In recent days we have reprinted a number of articles about illegal evictions happening during lockdown, when evictions are prohibited by law. After the recent incident in Khayelitsha, where a man was dragged from his shack, social justice organisations have called on Minister Lindiwe Sisulu to stop municipalities destroying homes. 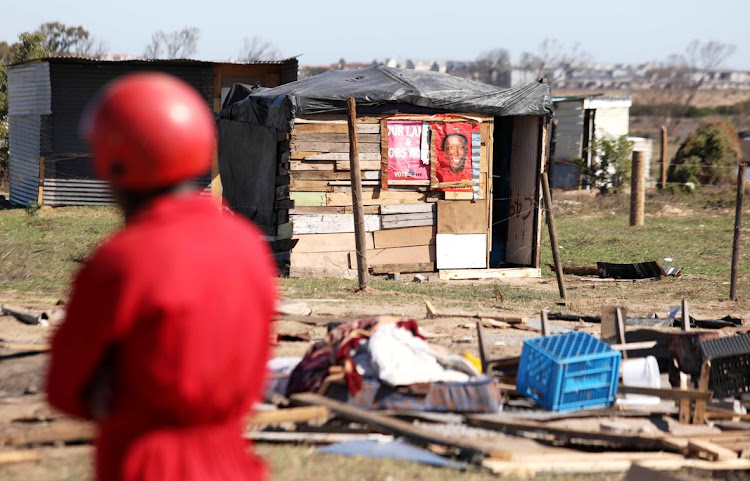 A member of the Red Ants during the demolition of shacks in Dunoon, Cape Town, on April 25 2019. The Socio-Economic Rights Institute (Seri) has joined the call to prohibit evictions during the lockdown. File photo. Image: Sunday Times/Esa Alexander

A public interest law centre has called on human settlements, water and sanitation minister Lindiwe Sisulu to issue a directive to stop the demolition of homes by all municipalities.

The Socio-Economic Rights Institute (Seri) made the call after Sisulu’s response on Thursday to the humiliating eviction of a resident at Empolweni in Khayelitsha, Cape Town, by the city’s anti-land invasion unit.

Sisulu condemned the “distasteful” eviction of a man seen on video footage being dragged naked out of his shack.

In the video, shared on Wednesday by social justice activists, members of the city’s anti-land invasion unit were seen removing the naked man from his shack and taking him outside. There is a scuffle when he tries to go inside as officers block his path and push him to the ground.

“While the minister’s efforts are welcomed, they fail to fully acknowledge the widespread nature of evictions and demolitions of poor and vulnerable households across the country during the Covid-19 lockdown,” Seri said in a statement.

It said the blatant disregard of people’s right to housing and dignity portrayed by the City of Cape Town was shared by various municipalities across the country.

Seri said it had been concerned by the prevalence of evictions that were instituted by the cities of eThekwini, Johannesburg and Ekurhuleni respectively.

It said the municipalities consistently claimed that they were demolishing incomplete or unoccupied structures, despite evidence to the contrary.

“These attacks have been ordered and carried out despite a moratorium on evictions during Covid‑19 alert levels 5, 4 and 3. These are gross violations and warrant the minister’s urgent intervention.”

Seri said various social justice organisations had made submissions calling for the nationwide moratorium on evictions to include a directive under the Disaster Management Act.

The organisation said the directive should state that for the duration of the national state of disaster, no one may demolish any structure that has been or is being constructed for the purposes of residential occupation on any land or in any building without an order of the court.

Meanwhile, the South African Human Rights Commission (SAHRC) said actions by city officials were a clear violation of rights to human dignity and to freedom and security of the person.

“There was recklessness among the officials about whether the victim would be humiliated and his dignity violated. This action does not belong to the democratic South Africa,” it said.

The commission said it understood the land in question belonged to the City of Cape Town.

It said it has called for communities – despite their desperation to secure housing – to refrain from unlawful land invasions.

“Similarly, the commission reiterates that evictions, demolitions and the removal of people from land needs to be conducted within the limits of human rights as set out in … the constitution, the law and human decency.”