PIE and Airbnb or guest houses – eviction rights and wrongs 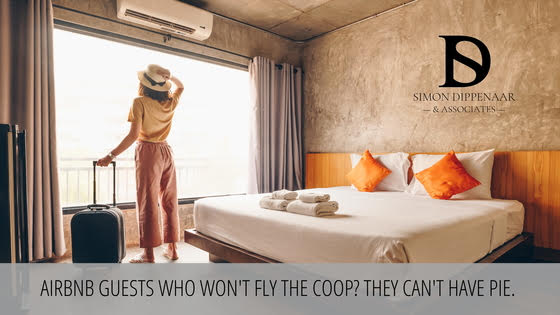 PIE & Airbnb – are your guests protected?

What happens when guests book into an Airbnb property or a guest house and then refuse to leave? This happens more often than you might think, especially with Airbnb lets, because the hosts are usually ordinary homeowners with a bit of extra space, which they let out to supplement their income. Airbnb is built on the premise of the “sharing economy”, where people share underused assets for cash. The sharing economy is based on a peer-to-peer business model rather than a conventional commercial paradigm. Because most Airbnb hosts are not professional landlords, guests may take advantage of the more relaxed relationship. This happens particularly when a property owner rents out a home that is not occupied. This occurred when a group of activists outstayed their rental period in a Camps Bay mansion last year.

The past year has been unusual…some would say unprecedented. We have been living under a national state of disaster, of varying levels, which has impacted on normal policies and procedures. Under Alert Levels 5 and 4, no evictions were permitted. Under the first round of Level 3, a court could grant an eviction order if it was just an equitable, but even then it would be “stayed” until  after the national state of disaster was lifted, or such time as the rules allowed. Under Alert Level 1, the courts could grant an eviction order, allowing tenants a reasonable time frame to find alternative accommodation and vacate the property. Landlords had a duty to prove the eviction was just and equitable.

Then we found ourselves back in Alert Level 3 – “adjusted”. Under these rules, evictions were once again being granted but not executed, but the court would allow an eviction if it believed it was not just or equitable to suspend or stay the order. This might occur if, for example, an occupier was causing harm to others or posing a threat to life, or if the party applying for the order had taken reasonable steps in good faith to make alternative arrangements with all affected persons.

We are now, at time of writing, living under an adjusted Alert Level 1. The prohibition against eviction remains. In the words of the Disaster Management Act Regulations: “A person may not be evicted from his or her land or home or have his or her place of residence demolished for the duration of the national state of disaster unless a competent court has granted an order authorising the eviction or demolition.” However, the Act goes on to cite a range of conditions that must be met in order for an eviction order to be executed, reflecting the circumstances that existed during Alert Level 1 the first time round.

PIE & Airbnb: what does this mean for Airbnb hosts and guest house proprietors?

Amidst the ever-evolving regulations and the general confusion that prevails regarding rental housing and many other aspects of life under lockdown, it’s not surprising that some guests are taking their hosts for a ride. They claim protection not only under the Disaster Management Act but also under the Prevention of Illegal Eviction Act – PIE.

However, PIE does not apply to guest houses, hostels or Airbnb premises. A case appeared before the Western Cape High Court 10 years ago – Yussuf and Another v Ye Khan Investments CC and Another. Applicants claimed that the premises they occupied constituted a hostel and not a guest house, and they were entitled to protection from eviction.

The judge found for the respondents, saying that the PIE Act “…was passed to provide some protection to squatters and other persons who were occupying land or premises unlawfully and without any leases because they were desperate and had no other form of shelter or home.” A guest house does not qualify for protection in terms of the PIE Act because “…occupants in a guest house are occupying the premises for a fixed period of time with the express consent of the owner or the person in charge of the premises. This is a commercial property, like a hotel, which provides for short-term occupation of persons who are visitors and not to persons who are long-term occupiers of land or property because they have nowhere else to live.”

The judge continued, “I also do not accept that there is a difference between a ‘guest house’ and a ‘hostel’ which would render the latter susceptible to the provisions of the Pie Act, but not the former…That is not the purpose of the Act or the Constitution which provides protection to persons who are destitute and have taken refuge in some or other property because they have nowhere to live. The Act cannot be applicable to persons who move into a guest house or hotel.”

PIE & Airbnb – is it different from a guest house?

Airbnb was founded in 2008 but did not arrive in South Africa until 2010. At the time of the judgment referred to above,  Airbnb was not a significant player in the accommodation industry and did not merit a mention in the case. However, despite being untested in case law, Airbnb functions as a guest house or hotel for its users and is usually chosen as an alternative to these types of traveller accommodation. Therefore, it is hard to imagine an Airbnb guest being treated any differently in law to a guest house or hotel guest.

Get professional help from a leading eviction attorney in Cape Town

If you are an Airbnb host or guest house/hotel proprietor with a guest who won’t leave when they are due to check out, give eviction attorney Simon Dippenaar a call or send a WhatsApp to 086 099 5146. SD Law is Cape Town law firm with expertise in property matters including rental housing, eviction and conveyancing. We can help you resolve your eviction case swiftly and legally. You can also email Simon at sdippenaar@sdlaw.co.za.