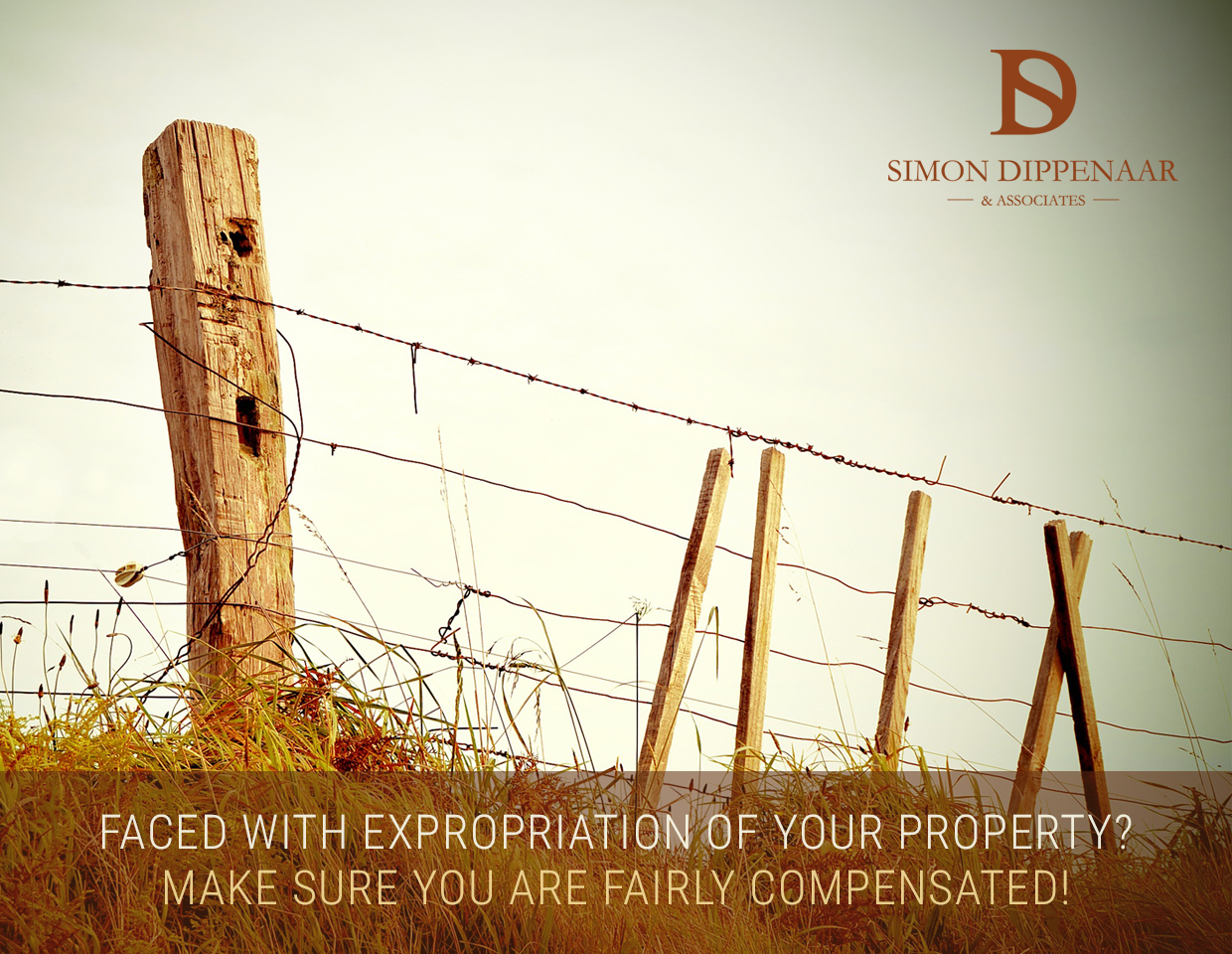 Last week we looked at the Expropriation Bill 2015 and what it means for property owners. In the second part of this article we deal with an aspect beset by controversy – compensation: how much and when.

How is compensation determined?

What is ‘just and equitable’? How and when will compensation be paid?

It’s worth noting that one of the better features of the 2015 bill, compared to the 2008 version, is that compensation is decided by the courts, not by the state.

Issues affecting the amount of compensation to be paid are:

An expert, unbiased opinion might be useful at this stage – property and its value, apart from being a financial transaction, can arouse strong emotions.

You should be aware of some factors the authority will ignore when determining compensation:

What to do when you receive notice of expropriation

If you are the owner or holder of an unregistered right, you should respond to the notice of expropriation within a 20-day period (which can be extended), whether or not you agree to the expropriation or the amount of compensation payable.

If you claim an amount of compensation and this is rejected by the authority, the authority has to propose a ‘just and equitable’ amount, detailing how this amount has been calculated and what is included. In this situation, you will need to provide supporting documentation within 20 days of delivery of the statement indicating the amount claimed.

If an agreement is not reached at this stage and you don’t institute legal proceedings, it is assumed that you have accepted the offer. If you are entitled to compensation, 80% must be paid to you on the date the authority takes possession of the property.

If there is a mortgage or a deed of sale on your property, the appropriate amounts are paid by the authority to the bond-holder or buyer. If you cannot reach agreement with the bond-holder/buyer, then the matter will be decided in a court application.

Property rates and other charges are paid by the authority from the compensation. (The municipal manager is responsible for ensuring that the information regarding outstanding charges is forwarded to the authority.)

Under certain circumstances, it may be necessary for compensation to be deposited with the Master of the High Court – for example if the property was a bequest to people unknown to the parties involved, or if the address of the payee cannot be provided.

Your property may be expropriated on a temporary basis – in the event of a disaster, for example. ‘Temporary’ means a period not longer than 12 months (this may be extended by court order) and some of the provisions of the bill are waived. Compensation is payable.

If, for any reason, the property is no longer needed – perhaps the reason for the expropriation is no longer in the public interest – it can be withdrawn, in which case there is provision for recompensing the owner.

Does the bill infringe the Constitution on issues such as property rights and the removal of the ‘willing-buyer, willing-seller’ approach? The bill seems to relate not only to land, but to shares, intellectual property and, indeed, moveable property. Are we heading for a Zimbabwe-style land grab or are we protected, at least to an extent, by our Constitution?

As mentioned in the first part of this article, there has been a great deal of discussion around the Expropriation Bill, mostly relating to the constitutionality of the powers given to the minister and state organs to expropriate property either for ‘public purposes’ or ‘in the public interest’.

The debate is likely to continue until the pertinent points have been addressed and clarified, probably in the Constitutional Court, and there are calls from the DA, AgriForum, and the Institute of Race Relations for further discussion.

Help is at hand

Meantime, if you are faced with a possible expropriation, we strongly advise you to read the bill/act and prepare to take legal advice. This is a potential minefield, but with the right approach you could save yourself time, money AND heartache. Contact Simon today on 087 550 2740 or email sdippenaar@sdlaw.co.za

Expropriation Bill & Land Reform – What You Need To Know

The word ‘expropriation’ sends a shiver down the spine of many property owners and so the Expropriation Bill, passed by the National Assembly in May 2016, has attracted a great deal of attention.

Just what is ‘expropriation’? Very simply, it is the taking of privately owned property by government (the expropriating authority) for the public good in return for ‘just and equitable’ compensation. 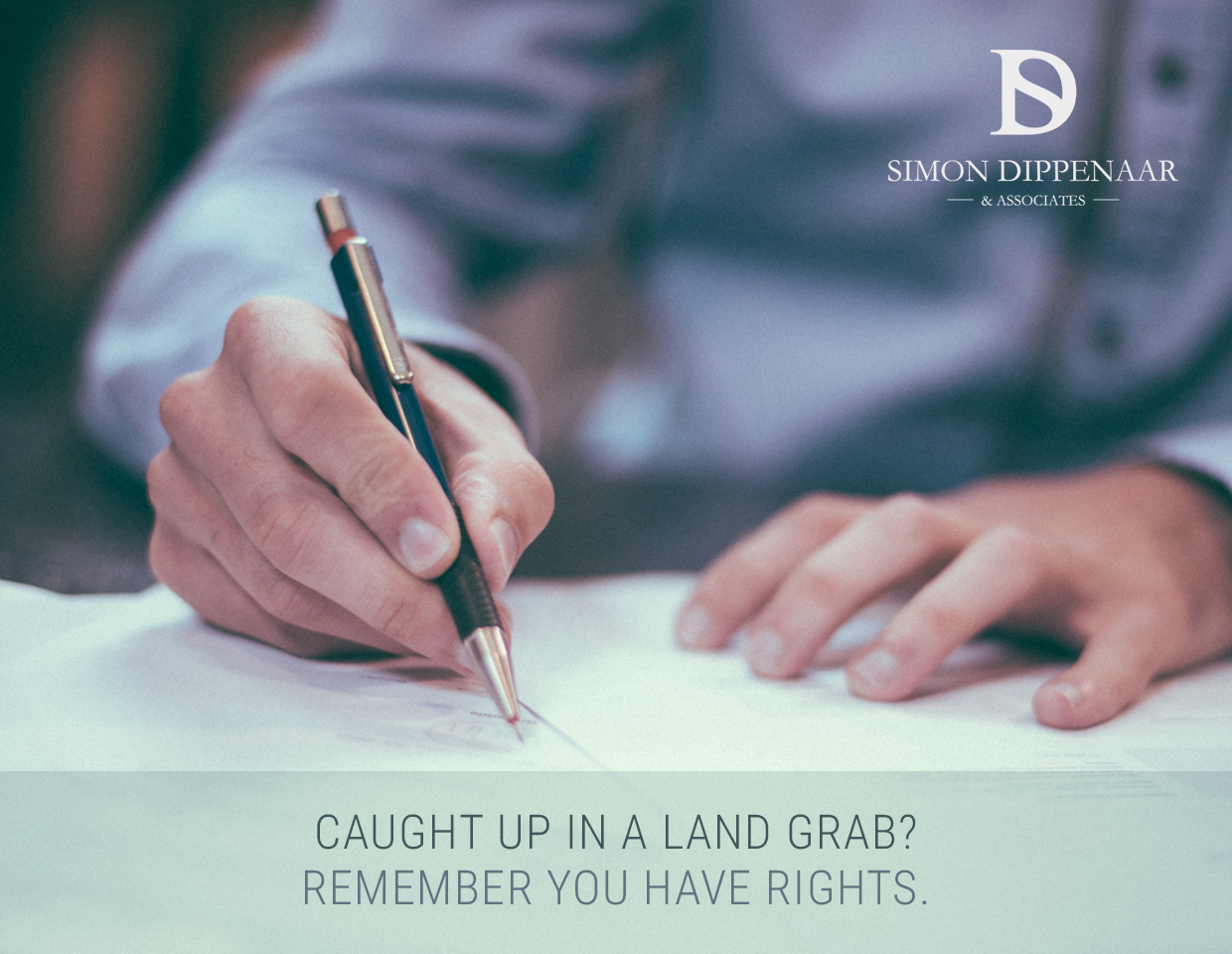 Expropriation has been acknowledged by the Constitution of South Africa as a means for the State to proceed with land reform, land redistribution and service delivery, for example. The 2015 Expropriation Bill is the latest – and depending on your viewpoint – the most effective and fairest legislation to date to deal with South Africa’s land issues.

That doesn’t mean it’s perfect! Questions are still being asked about the constitutionality of the bill and there is much concern about the powers given to the State in matters of expropriation, the amount of compensation that should be paid, property owners’ rights and so on.

Should you be worried? In this article we will give a brief overview of the clauses of the bill and aspects being debated. While it’s important to be aware of the ramifications, all is not doom and gloom, at least not at this stage.

How will the bill work in practice? Are there enough qualified people in the employment of the State to implement the provisions of the expropriation bill? There is a lack of clarity here as well; the bill has yet to be tested in court. How robust is the document, currently awaiting the signature of the President before it becomes an Act of Parliament?

Objectives of the Bill

The stated objective of the expropriation bill is to provide a uniform and fair procedure or framework for all expropriations, within the provisions of the Constitution.

In this context, the history of the acquisition of the property, the current use of the property and the purpose of the expropriation will be taken into account. As a land/property owner, you have the right to approach the courts if you believe the proposed compensation is inadequate. (The legal route can be a costly and time-consuming exercise; mediation is an alternative but this might not work for everyone.)

Let’s look briefly at the provisions of the bill …

How does it work?

The expropriating authority can only expropriate property for a public purpose or in the public interest.

If there is an intention to expropriate your property (remember, this is not restricted to immovable property), you will have the opportunity to negotiate with the authority (except in the case of an urgent, temporary use). The bill is clear that every effort must be made to reach agreement with the property owner/holder of an unregistered right.

What powers does the Department of Public Works have?

The minister has a ‘general power’ but property can only be expropriated if this is directly connected to the minister’s mandate. These powers can be delegated to officials in the Department of Public Works.

There are some limitations in delegating the powers. Officials may not:

The expropriation bill outlines the guidelines that ensure the property is suitable for purpose:

The notice of expropriation is then served to all affected parties, detailing the following:

What happens if you have a right over a property? Rights are dealt with individually and separate notices must be delivered to each right-holder. Everyone has the same opportunity to object (in writing) and the authority has to consider all objections and submissions in good time before proceeding with expropriation. Incidentally, the same terms and conditions apply to rights-holders as to owners.

If you are involved in the expropriation of your property, the authority takes possession in the period between the delivery of the notice and the actual expropriation. Compensation will be paid for costs incurred but it is your responsibility to maintain the property.

In the second and final part of this article we’ll outline the remaining clauses and briefly discuss some of the concerns being expressed about the bill.

Meanwhile, if you have concerns about the expropriation bill or your property and want to talk to an expert, contact Simon on 087 550 2740 or email sdippenaar@sdlaw.co.za

Simon Dippenaar & Associates Inc. is a law firm in Cape Town and Gauteng with eviction lawyers and attorneys specialising in eviction law.