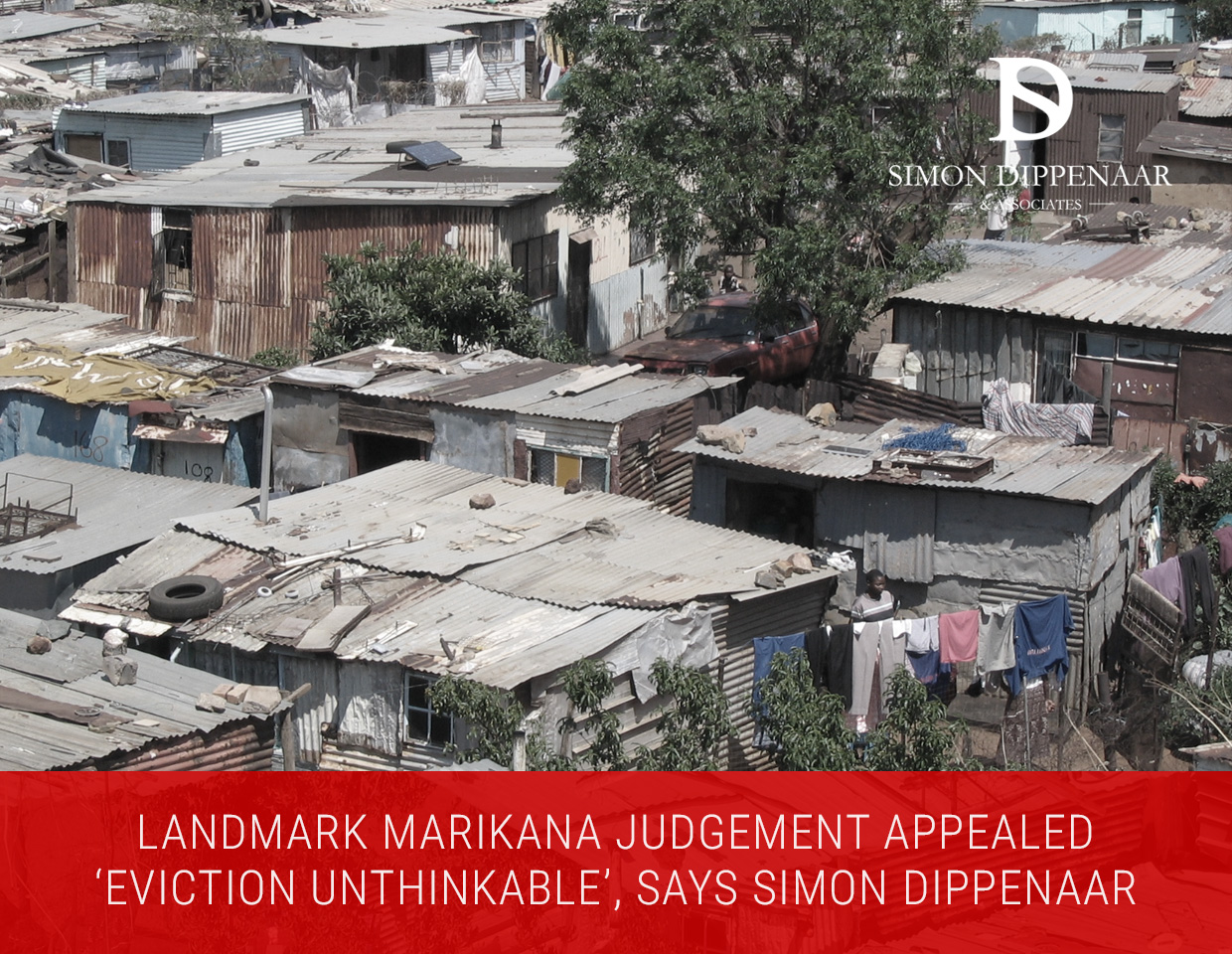 A landmark judgement in the Western Cape at the end of August this year dismissed an application to evict occupants from the so-called Marikana settlement near the Cape Town International Airport and ordered the City of Cape Town to negotiate a purchase price to buy the land or expropriate the land instead. Copper Moon Trading, the owner of Erf 149, Phillipi, has now appealed to have these rulings overturned.

It is asking for the State to either purchase the property at its market-related value, as determined by an arbitrator, or pay Copper Moon damages to the same value. Alternatively, Copper Moon is seeking to have the occupiers evicted and for these costs to be borne by the State.

The City of Cape Town has applied for leave to appeal.

Simon Dippenaar & Associates with the assistance of Adv Ralph Kujawa, acting pro bono on behalf of the approximately 10 000 unlawful occupants of Erf 149, part of the Marikana settlement, has called on the Court to refuse the appeal with costs. A costs order in favour of indigent litigants is not unprecedented and has been supported in previous judgements to encourage attorneys to take on more pro bono work. It also sends a strong message to applicants that they could have costs awarded against them even if their opponents are not incurring legal costs.

“The State has not provided alternative housing plans and the eviction of so many people would create a humanitarian disaster. This is unacceptable in a constitutional democracy such as ours where, in terms of the Constitution, the Government is required to protect the property rights of its citizens and to provide housing. Eviction is not only unrealistic, it is unthinkable,” says Simon Dippenaar. “We have to strike a balance between the constitutional rights of the property owners and the occupiers.”

Dippenaar and Kujawa, who officially went on record at the Constitutional Court at the end of October, are championing the human right to housing and protection for the most vulnerable in society, including the Marikana residents.

The case forces government to face up to the plight of the homeless and highlights the extreme poverty and desperation of many South Africans. An estimated 60 000 people have been living on the 40-hectare Marikana land since 2013. They have nowhere else to go.

Simon Dippenaar has a BBusSc LLB degree and Professional Diploma in Legal Practice from the University of Cape Town, and is an admitted attorney of the High Court of South Africa. He is the founder and director of private legal practice, Simon Dippenaar & Associates, with offices in Cape Town and Gauteng representing South African and international clients.

Simon’s dedication, diplomacy and compassionate approach extend from Family Law to each of his fields of expertise and have earned him a reputation for cracking cases where his competitors have failed. His associates are appointed for their skills specific to their areas of practice.

Simon is committed to serving his community and the less fortunate, increasing access to justice by making legal expertise available to deserving cases. He is on record in one of South Africa’s biggest mass eviction cases in Marikana, representing, pro bono, the unlawful occupiers and their constitutional right to adequate housing.